Today with beautiful sunny Autumnal  weather we jumped back into the trusty Kia for the last time and drove through Edinburgh’s not very busy peak hour traffic to its neighbour city Glasgow one hour away.  Glasgow is no longer a bleak drab city, quite the opposite.  Its freeway access is second to none and the cityscape is stately, modern, clean and energising.

We made our way directly to the Kelvingrove Art Gallery which is an amazing Victorian purpose-built palace designed for presentations of all kinds.

It has a huge hall with pipe organ on the second floor and organ recitals everyday. Installations of all kinds are everywhere and some sort of major production was being staged in the ground floor studio. It is a very happening place indeed.

Our goal was to see Salvador Dali’s wonderful Christ of St John of the Cross which  is a stunning treatment of the cosmic impact of the  crucifixion. Spanish born Dali was an unusual figure and produced extraordinary contemporary art but later in life believed that he was the recipient of a vision and turned to some religious themes in his painting. He was received into the Church personally by the Pope at the time who gave his blessing to his religious art work.  This painting has always meant a lot to me and it was wonderful to see it in reality. It is much larger than I thought it would be and a very moving experience. 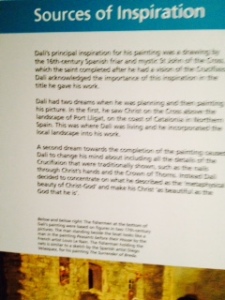 Moving on from Glasgow we drove the M8 South back into England, past Thomas Carlyle’s birthplace and stopped off at the wonderful historical town of Carlisle with its ancient Norman and Gothic cathedral. Below is the sort of scenery we passed on the way to Carlisle on an absolutely gorgeous Autumn day in England 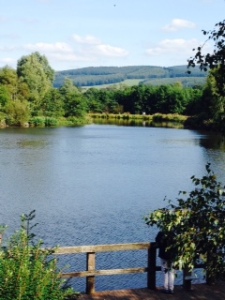 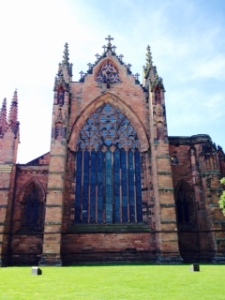 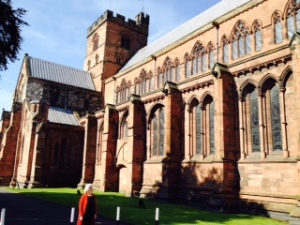 Two shots of the exterior of the Carlisle Cathedral in beautiful red stone.

In its first incarnation in the C13th  it was a Romanesque cathedral with the normal “fat” round and shorter columns.  Some of these were broken down for the stones for defence by Cromwell’s men but quite a distinct section remains.

The Gothic section was added in C14th and is restrained and dignified. The nave is relatively short. The sanctuary was covered by a platform today because the local Trinity Grammar School has an academic presentation tonight.  The C16th grammar students have left their mark on the choir stalls with their Etonian like graffiti, names and even family crests. 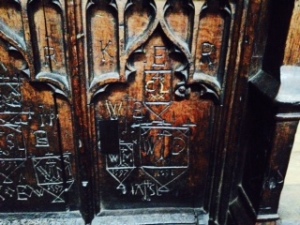 On the back of the ancient choir stalls are wonderful  C16tth paintings, some badly damaged but others in good shape, depicting the twelve apostles and several saints.  Some wonderful carving from Henry VIII’s time remains from Lancelot Salkeld, the last Prior of the ancient Abbey alongside the church. Apparently he kept his job by offering his skills and they are memorable including Henry’s coat of arms and several portraits in wood allegedly of Henry’s forbears (one of whom is the Roman emperor Severus who was of course an African as the carving shows!..(carving was on the other side of the Salkeld screen)

For me a particular treat was the memorial to William Paley, the biologist whose writings on the evidence for creation in defence of divine creation were forrmely required study for all Oxford entrants.  In a way he was the most famous supporter of “intelligent design”. He is buried at Carlisle with his two wives (the first died).

The old abbey is still very much in evidence and the crypt is now an excellent tea room. The grounds of Carlisle are peaceful, treed and very inviting.

From Carlisle we drove through the wonderful Lakes District of northern England, draped in late afternoon sun in gorgeous Derwent colours  and we are now happily ensconced in the Crown Plaza ready to fly out early tomorrow morning to Munich, then Singapore then Melbourne.

So this little pilgrimage comes to an end and I thank the faithful who have followed or tuned in from time to time. We have seen much to digest and ponder upon in the years ahead. We have been both encouraged and dismayed by some aspects of “church”.  We have travelled quite close to political turmoil throughout Europe including terrorism in Turkey and Belgium, Financial brinkmanship and distress in Athens and refugee trauma in Calais, Greece and Germany.  Finally we joined the Queen in Edinburgh to celebrate the longest reign of a reigning monarch. Whatever your views of the monarchy, she has worked hard, long and consistently for the good of others and from our observation, lived relatively simply compared with some of the palaces of other leaders in the past. We  pray God for a safe flight home and give thanks for the privilege of sharing some of this experience with you fellow pilgrims.