Posted on September 8, 2015 by raprideaux 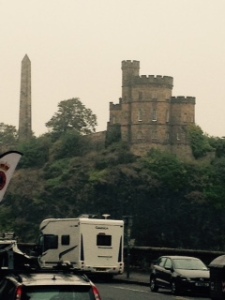 View once again form Northbridge looking towards the Edinburgh monument and a castle, on the way to Holyroodhouse

This morning we once again jumped aboard our trusty double decker bus and ventured back into Edinburgh and walked down the Golden mile towards Holyroodhouse, the Queen’s official Scottish residence.

On the way we were waylaid first by the two oldest houses in Edinburgh, one possibly lived in by John Knox; 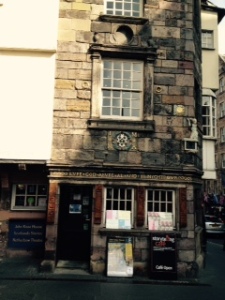 One of two of Edinburgh’s oldest houses ..this one possibly lived in by John Knox

and secondly  by Canongate Presbyterian Church, the chapel of Holyrood. The all blue interior was a bit startling at first but it kind of grows on you after a time. It has been the place of many historical events including the Scottish crowning of Charles 1 as King of Scotland (although we note that the Holyrood Abbey also claimed that honour!) 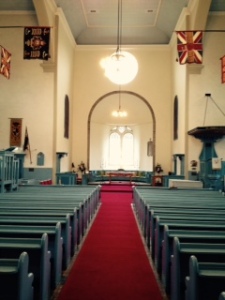 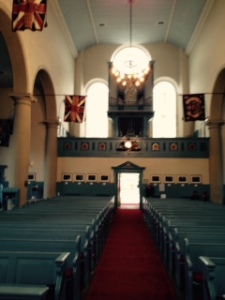 View from entry to the sanctuary of Canongate Kirk  and, right, view from sanctuary to gallery

royal fitting on one of the pews at Canongate Kirk

Thirdly we were waylaid by the extraordinary architecture of the new Scottish Parliament…like Fed Square in Melbourne Edinburghians either love it or hate it. 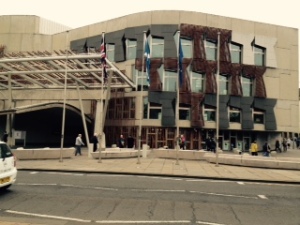 The new Parliament House replaces the old castle like building on Carlton Hill and it looks from the outside like a collection of separate buildings loosely joined together. The irony is greater because the shot above faces directly on to ancient Holyroodhouse. The quote from wonderful Jesuit poet Gerard Manley Hopkins is one of many embedded in the wall of Parliament House which you can read as you walk along the footpath. The quotes include a  bitter appeal from Sir Walter Scott about how if we don’t like the parliamentarians we can sack them but none has nails long enough to touch the parliamentarians in London!

We finally made it to Holyroodhouse and once again enjoyed royal hospitality. 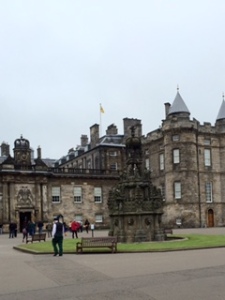 There is no photography in the house so were limited to external  shots  as above and shots of the old abbey, the courtyard and the garden.

The garden is impressive…leading up to and blending in with the surrounding grass covered hills right on the edge of Edinburgh. It is an exceptional outlook from this side! on the other side, the city and the new Parliament House! 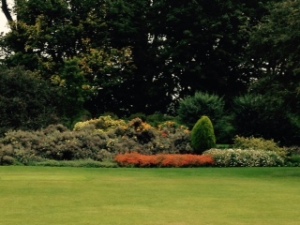 The  C15th House itself has seen a lot of history, some of it bloody especially with regard to the murder of the Italian secretary of Mary Queen of Scots …the spot is still marked on the second floor!  The internal rooms are dark with wood panelling everywhere and tapestries on most walls. 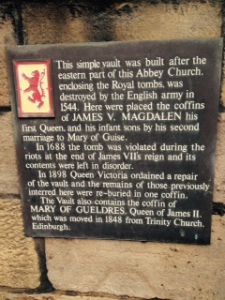 This is the sort of stuff that went on from time to time at Holyroodhouse!

The furniture is historic and rightly looks “tired”. Although the Queen comes to Holyrood for a week in Summer to have official engagements the reality is that Holyroodhouse is not a working palace like Buckingham Palace. She did entertain Pope Benedict here and he gave her a replica of the Charlemagne Lorsch Gospels complete with a replica ivory front and back cover. The three bits of the original are in the V & A, the Vatican and Romania! The feel of Holyrood is much more museum like with films of royal children and some very interesting material relating to Mary Queen of Scots and Bonnie Prince Charlie (including his two very small and smart pistols!). The long gallery is filled with a vast array of portraits of royals and other significant historical figures from Scottish history. After such a historical diet we needed to try out the Queen’s latest shortbread in the royal cafeteria! 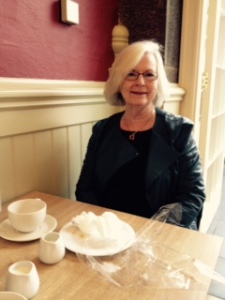 Ann enjoying a lunch fit for a Queen!

After lunch we walked across to the other side (literally) of Edinburgh to locate the Scottish Episcopal Cathedral of St Mary’s in the West End. (I had no shoes and complained until I met a man who had no feet…that’s how we felt after this trek!) Following the Reformation St Giles Cathedral lost then regained then lost its official “cathedral” status and is now a reformed cathedral of the Presbyterian Church of Scotland. This left Episcopal folk without a cathedral for some centuries until a massive donation from one family enabled the Episcopal church to commence, rightly or wrongly a traditional neo-Gothic cathedral in the late C19th. It is a huge plant including many surrounding halls and offices. Internally it is a restrained and dignified worship space right in the midst of a vast housing area of Edinburgh. 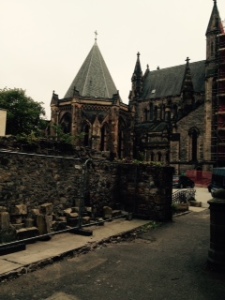