Today we left the leafy avenues of Harrogate and rejoined the M1 travelling north towards Scotland on yet another balmy sunny blue sky Summer day in Autumnal England.  We travelled wistully past the mighty Durham Cathedral perched on its hill on the Wear River and equally regretfully past the Holy Island of Carnaervon protruding above the horizon from the very blue North Sea. Our goal was Edinburgh and it was a beautiful drive as from Newcastle onwards there were steadily increasing views of the ocean and northern England and Southern Scotland’s rolling green pastures and sheep of all kinds.

We landed in Edinburgh, found our Premier Inn in Edinburgh East with the help of the faithful satnav and then ventured by bus into the middle of Edinburgh on yet another perfect day weatherwise in the UK.  Edinburgh was in festive mode in the sunshine with a rock band performing in the square outside the Art Gallery, and the Scots sunning themselves on the lawns in the old glacial valley (now beautiful lawns) below the two street ridges which are the two major shopping drags in the city.

We have been in Edinburgh previously, visiting the Castle and being amazed by the Scottish Crown jewels as well as visiting a school and doing some shopping in Princes St. I think 17 years ago I was less interested in architecture than I am now.  This time around I have been amazed by the Gothic splendour of St Giles Cathedral in the Royal Mile, the Classical and neo-Gothic towers and domes of the University and the older C17th homes in amongst the newer buildings. All of this set against the grass covered surrounding hills and vistas of the ocean beyond. There is a vibrancy and energy about the city which is very attractive. I have to say though that there were more beggars on the streets of Edinburgh than any other European city we have visited. This was disturbing and heart breaking. The folk on the street we approached for direction were unfailingly friendly and helpful. It was quite an uplifting afternoon.

The major cathedral in Edinburgh is St Giles Presbyterian Cathedral in the Royal Mile. It is a very large traditional Romanesque/Gothic cathedral with many interesting modernising features and of course now sitting firmly in the Reformed tradition with many catholic features either removed completely or sidelined.

St Giles Cathedral is remarkable for the transformation of its interior following the Reformation.  Originally a C12th Romanesque church  it was transformed into a Gothic structure in the C14th with the result that there is an interesting mix of columns supporting the structure.

Following the Reformation a massive change took place in the sanctuary of St Giles with all of the Sanctuary furniture being removed completely..high altar, statuary, images, rood screen and reredos as well as choir stalls. Some remnants of this furniture is scattered around the cathedral and in their place are chairs for worship with a new modern communion table placed in the centre of the crossing. Elsewhere other elements of pre-reformed architecture including various side chapels with tombs of church benefactors etc have been simply partitioned off and left as historical remnants.

This is the illuminated Celtic carving which welcomes you into the cavernous St Giles Cathedral. It is a good mix of ancient and modern and looks like a very effective worshipping space. The following photos are various aspects of the interior. It was quite dark inside so difficult to photograph. 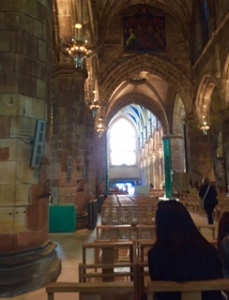 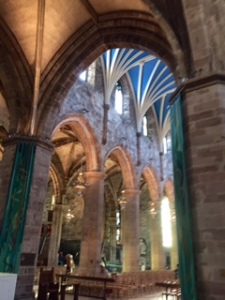 Scattered in the aisles in suitable places are former furniture pieces including the old wooden pulpit, the reredos, choir stalls and prayer desks

When I studied Church History Reformation we focussed on the English, German and Swiss reformers and paid little attention to John Knox and yet he was a key figure in Scottish history. Because of the at times anti English pro French state of Scottish politics and the strength of the Stuart claim to the English throne including the claim of Mary Queen of Scots there was every chance that Scotland could become a Catholic stronghold. John Knox had “trained” in England during the reign of Edward VI and was an influence on the English prayer book. When Mary came to the throne after the death of Henry VIII Knox fled to Switzerland and studied with Calvin. Returning to Scotland he became a fierce reformer transforming the nation and opposing Mary Queen of Scots rule. He gave his life to this course and permanently changed the understanding of the Christian faith in Scotland. He is honoured in St Giles with a major statue