Today we awoke to blue skies and a gorgeous Summer day in Yorkshire making Autumn wait just a little longer.  We made our way to the 10.30am family eucharist at Ripon Cathedral, the mother church of the Diocese of West Yorkshire and the Dales.

This is the largest diocese in England and covers huge cities like Leeds, Harrowgate, Bradford, Wakefield and Huddersfield, a total of 2.5 million folk. Today’s service was their monthly “open doors service” deliberately aimed at young families and seekers. They also welcomed back recently baptised children and their families for a welcome and gift from the congregation.

The service was lead by Canon Ruth Hind and the preacher was Canon Elizabeth Sewell. The sermon was based on the Mark 7 reading of Jesus reaching out to the Syro-Phoenician woman…a curious lectionary coincidence considering the refugee avalanche convulsing Europe at this very moment.  Canon Hind gave a brief introduction to the issue and asked the question did Jesus change his mind about his mission when challenged by the Syro-Phoenician woman’s insistent request for help? Canon Hind said no he didn’t but it may be that Jesus adjusted his theology…the idea that Jesus had a developing theology was in itself left hanging somewhat.

This brief introduction was followed by calling the congregation to get up from their seats and visit some of the five prayer centres around the church.  These contained a series of quite confronting refugee situations occurring currently and craft or artistic or symbolic activities designed to force folk to come to terms theologically and practically with current events.  It was an unusual thing to see in a staid middle class congregation but most of the congregation became involved although some stolidly sat it out grimly!

The service had a mix of new and old music, and sometimes new words with old tunes;  a piano and small group was used in the main but the organ was used first and last. It was an impressive service and carried quite a punch with me given the current crisis in Europe. This is now the fourth Sunday cathedral service we have enjoyed (St Paul’s in London; Gulldford Cathedral, St Albans cathedral, and now Ripon Cathedral as well as Holy Trinity Brompton.  All five services have been engaging, energised and challenging as well as all being totally different. It has been an interesting and edifying experience.

The Cathedral is one of England’s most ancient with a C7th Saxon crypt all that is left of the stone church built by Wilfrid in 672, the Norman abbey founded in 1132, Gothic towers built in 1220 and the nave rebuilt in 1502-5. It is a beautifully maintained and elegant cathedral with Victorian stained glass windows at the lower level, clear glass at the top level. The C20th pulpit is marble and metal and sits a little awkwardly.  The stone rood screen has a clear view to the main altar with the ancient quire stalls behind it. Both side chapels have modern make overs, one of them a 1970s “glam” look designed by silversmith Leslie Durbin. The strength of this cathedral it seemed to us is that it also very much the Ripon parish church and it is alive and kicking.

and beautiful little villages  to the gorgeous coastal town of Whitby at the mouth of the Esk River. The Abbey ruins still stand proud  and high on a beautiful headland in Whitby overlooking the beautiful village of Whitby which is built around the mouth of the Esk River. From the abbey 199 steps above the town you can look down on the village of Whitby, the winding Esk River full of boats, the busy harbour, the sandy foreshore  with folk swimming, the high rolling surf, the narrow heads, the headland beyond and to the south the rollling Yorkshire fields and hills. 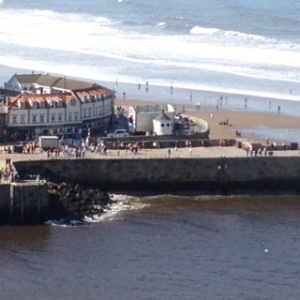 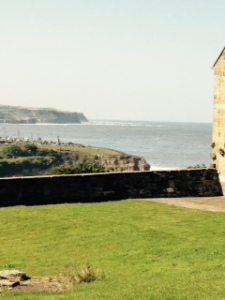 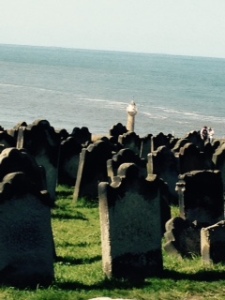 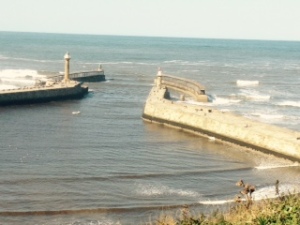 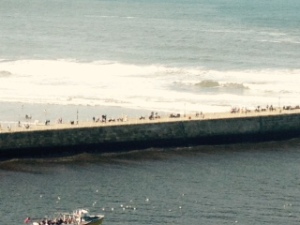 The  ancient ruins of Whitby Abbey, destroyed, as was the Fountains Abbey of Ripon,  by Henry V111’s dissolution of the monasteries still stands proudly today.  Whitby as we all learned in ThL Church History was the site ot the first English synod when the British church had to decide between ancient Celtic Christian customs and Western Roman customs led by the Pope’s emissary Augustine (not to be confused with Augustine of Hippo of the Confessions.) As usual Rome won the day and Wilfrid became a bishop and the Celtic Christians retreated to the wilds of Wales  and Ireland and the islands of Skellig off the coast of Ireland.  But the Abbey ruins stand tall and no doubt could tell many stories. 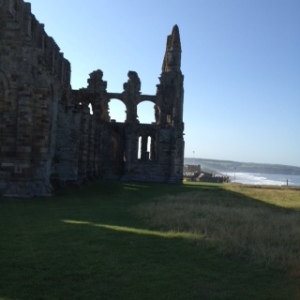 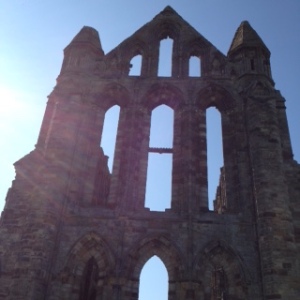 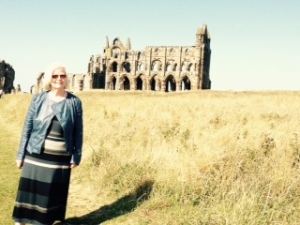 It is a simply stunning sight on a blue sky day! There is also a youth hostel serving light meals and a stunning museum of artifacts.  A lot of the abbey remains and it is an inspiring and powerful sight to behold and also a place of peace and meditation. A new feature is the setting up of a copy of the Borghezi Gladiator (now in the Louvre) statue in the  entrance to Whitby Abbey replacing one that was formerly set up by Hugh Cholmley who developed the old Abbot’s house into an C18th mansion.  No one knows what happened to Cholmley’s model.  Strangely enough alongside this is a touristic mix of Gothic Dracula stuff because apparently Bram Stoker was inspired by Whitby Abbey to create the scene for his Transylvanian hero. Indeed I did see a number of black crows flapping about with the seagulls! 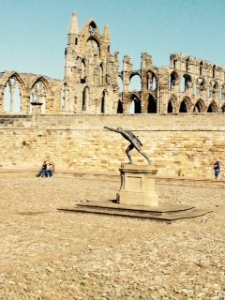 Bronzed gladiator in the entrance to Whitby Abbey replacing the Cholmondly statue that disappeared who knows when. The original is in the Louvres and is frequently copied.

Standing close by the Abbey on the same hill is C12th St Mary’s church surrounded by a vast graveyard which includes an ancient Celtic cross.  The church, unlike many early churches in Britain has not been Gothicized and retains its crowded box pews, galleries, three tiered pulpit and very ancient stone sanctuary. At first it looks like a junk shop being so crowded with furniture but after a while you get the feel of it. 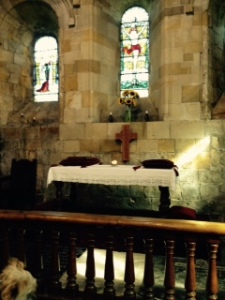 this sanctuary  is the only uncluttered part of  St Mary’s …the rest is out of control and you can see why these churches were cleared out in the C18th.

The following shots show the chaos of the boxed pews, the three storied pulpit and the gallery above. It is claimed they could fit 1000 in. I doubt that! The other shots are of “Caedmon’s cross and inscription”.

On a number of occasions on this pilgrimage I have found places of deep peace, thoughtfulness and spirituality. This is one of those places and they are needed!

We returned home to Harrogate via  a different even more beautiful road through the Northern moors, seeing the huge hole of Horcum in the ground at NorthMoor National park…was it a meteorite? This is a quite spectacular depression in fact caused by “spring-sapping” where water wells up and gradually eats away the rock above. It is still continuing and has created a humungous depression which is quite awe-inspiring!