Today we ventured into Lord Nelson territory in Norfolk, past majestic Ely Cathedral and crossing not only the River Great Ouse but the River Little Ouse as well as the River Wissey! all lined with family boats and looking sparkling and finally arriving at King’s Lynn. Turning east from Kings Lyn along the Fakenham Road there are three magnificent estates along a 25km length….Sandringham, Houghton Hall and Holkham.  We managed to get into two of them but arrived too late to see the house at Holkham. All three estates had small additional villages within the estates

At our first stop we visited Hougton House,the home of Britain’s first Prime Minister, Robert Walpole and his majestic C18th mansion and gardens.

Charles Bridgeman did the gardens which include vast deer grazing lawns and over 2 miles! of mown parkland with wonderful trees.  The  absolute highlight is a five acre! walled garden containing English roses, topiary, greenhouse, fantastic herbaceous borders, a croquet lawn, sculptures, fountains, follies and the amazing “Waterflame” by Jeppe Heine.  The house was passed to the Cholmondeley family by marriage and the current owner is the eighth Marquess of Cholmondeley. The architects were James Gibbs and Colen Campbell and the interiors by William Kent, a disciple of Inigo Jones.  The significantly remodelled mediaeval St Martin’s church is located in the grounds but some distance and we did not venture in.  A “lightscape” display by James Turrell is a current feature at Houghton.

Unfortunately no photography is permitted inside Houghton Hall  which is a pity because the interior is quite unlike other stately homes we have seen. The walls of the large staircase are covered with grey canvass painted in grissaille style to imitate sculpture i tromp l’oeil style Many of the ceilings are painted and the furnishings are mostly original to the House and functional and “working” rather than works of art for their own sake. A good example is Walpole’s working desk which is located in the most wonderful library.  I was unfortunately unable to photograph this treasure house of books.  On the other hand the State bedrooms had certainly the highest coverings we have seen anywhere and there were significant tapestries covering many walls.  The paintings are the tragedy of Houghton….the whole collection being sold to Catherine the Great and most still residing in St Petersburg.  A massive painting of Catherine the Great hangs in one of the State reception rooms as part of the receipt!  A few have been bought back and the original frames remain but the most of the paintings are copies.  This is a peaceful home with many exotic trees and plants and a most hospitable team of  welcoming guests.

We backtracked from Houghton Hall to the Queen’s personal estate at Sandringham just a few kilometres west of Houghton.

This remarkable estate of 200 000 acres contains one of the most beautiful gardens I have ever had the pleasure of walking in. The tree plantings are quite remarkable and the quality of lawns, lakes, paths and designed gardens is exceptional. The House sits on a site recorded in the Doomsday Book of 1086 but the current house dates from 1870 and it  has survived fire and various additons from various royals. Once again no photography is permitted inside the house so no pics of the inside only the amazing gardens.

The Duke of Edinburgh describes it as “neither a castle or a palace but rather a large country house with an atmosphere of welcome” and I think that is a good description. The family rooms are large and spacious and built for comfort rather than display. Many of the personal collections of various royals from the past are on display (no stamps unfortunately) and the salon has the quality of a Stately home baronial hall with a minstrel balcony. There are books everywhere in beautifully crafted cases and the inevitable collections of arms including a remarkable display of Indian ceremonial knives and daggers given to the Prince of Wales (Edward V11) on a tour of India in the 1880s.

As well as the magnificent gardens the estate includes a museum (containing the childhood cars of the Queen’s children and the first royal Daimler Phaeton), and also the delightful little church of Mary Magdalene in which both Princess Diana and the new Princess Charlotte of Cambridge were baptised. A standout in the church is the silver facing on the pulpit and the communion table donated by a wealthy American to Edward V11.  The round walk back to the carpark from the house is to die for including glimpses of the house from various vantage points and remarkable tree and flower plantings as well as the little church and glimpses of the forest and parklands beyond.

It is easy to see why most of the royals love to come to Sandringham. Remarkably the grounds, shop and tearooms are open to the public throughout the year and the house also for many months throughout the year. Even when the Royals are in residence the public are permitted to wander throughout the grounds except for a relatively small section of the gardens around the house.  Sandringham is memorable in many ways, not least for the 500 staff families  who work hard to keep the estate shipshape and make the working farm run and who are unfailingly polite to the public ( as we found also at Buckingham Palace).

Leaving Sandringham in late afternoon we made a last minute dash for the majestic home of Holkham  in its own village on the seaside just 20 kms from Sandringham. This vast Palladian “pile” was closed by the time we found it but we were able to wander the vast grounds (but not the six and a half acres of walled garden!) and view the outside. The first Earl of Leicester, Thomas Coke commissioned the house in 1718 to house his exceptional collection of (largely Italian) works of art, statues , books and manuscripts.  His descendants still live in the vast estate and it is a busy and dynamic place.  A few photographs of the external appearance  in fading light will have to suffice for this extraordinary palace. 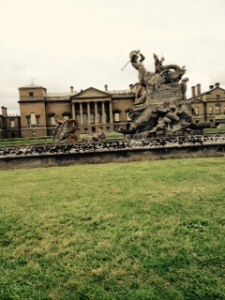 Excuse the worse than usual photo…taken on tiptoe peering through the external wall between the bollards!  amazing statue!