Today we completed our William Morris quest by driving straight back down from Wightwick Manor via the M5 to Gloucestershire to the small village of Kelmscott on the Thames, not far from its source in the Cotswold hills.  Kelmscott Manor was a C17th farm house, outbuildings and gardens which William Morris leased with his wife Jane and his companion/her lover Dante Gabriel Rossetti in 1871.

The Morrises were living at their much loved “Red House” in Kent but it was too far from his London business which was taking off.  The scandalous Rossetti/Jane romance was also taking off and it was socially  convenient for Morris to move the whole triangle to Kelmscott. During this difficult period Morris several times spent six months at a time in Iceland. He had learned the language and was interested in the northern sagas as in all mythology. Rossetti eventually left in 1874 never to return.

William Morris never owned the house but after his death and burial in the graveyard at St George’s Jane bought the house and lived there with her daughter May. The house was bequeathed by May Morris to Oxford University with very severe restrictions re change which led to the house and garden falling into serious disrepair. The Society of Antiquaries to whom Oxford passed on the Manor were able to overturn the will and have spent millions restoring the Manor to its original dignity. It is now a place of wonder and delight set in one of the most engaging villages in England.

The area is agricultural and fairly flat (Rossetti complained about how boring a place it was) rather than hugely romantically beautiful like say Stourhead gardens but it is quiet, picturesque and just 2 minutes from the Thames where Morris liked to fish. In 2003 the river flooded and fast work was needed to save the contents of the Manor House.  In the village there are a number of other early village homes and some newer very impressive additions together with the Memorial hall and three cottages all commissioned for the village by Jane and their two daughters. It was quiet, well away from London and a place for lots ot thinking. The memorial hall was officially opened by George Bernard Shaw a century after William Morris’s birth in 1834.

The rambling house has three floors and many outbuildings and the gardens have been beautifully restored after falling into disrepair after the death of May Morris who lived there after William and Jane had passed away.  All of the original furniture  from both the Red House and Kelmscott Manor was sold at the time  but the Society of Antiquaries has managed to find and repurchase many items of furniture as well as a complete collection of William Morris’s writings and the bookcases are filled with books by Ruskin, Scott, Dickens and many others that Morris read voraciously from.

A number of original prints from Burne-Jones are there as well as some very famous Rosetti portraits of Jane Morris. In addition Morris’s large collection of Durer prints is there, a number of significant quilts and tapestries, the original kitchen, paintings including a wonderful Brueghel of a garden, silk hangings and works of Morris from his various sojourns in Iceland.

It is impossible to acknowledge the depth and  complexity of the gifts of William Morris…a craftsman expert in design of every sort, wood, furniture, textiles and fabrics, tiles, painting and tapestries. His writing varies from learned works of ethnography and linguistics to theology and ethics, translations of the Odyssey, Icelandic sagas, the legends of the Nibelungs and accounts of Greek mythology such as Jason and the Argonauts as well as his own mythologies. He wrote poetry, sagas, literary criticism, art theory and history and these are only the areas I am familiar with. Although a child of wealth and well educated he was passionately committed to Christian ethics and the idealistic goal of abolishing the differences between rich and poor in society and these passions led him to join the Socialist Party in England at a time when the gentry were not supposed to be involved in such thing. All of this while maintaining a highly successful London design business.

Morris’s  Kelmscott Press set new standards for quality publishing and even facsimilies now fetch huge prices. This is a work of some genius, illustrated by Morris and containing Chaucer, The Romance of the Rose, Boethius and much more besides. Morris was also passionate about authentic arts and crafts, and, like Ruskin, was horrified by the mediocrity of mass produced and repetitive designs compared with unique and crafted art and workmanship produced by those who love their work and were not just compelled to be there. To have his skill in languages, poetic gifts, moral strength and to hold together his workaholic writing, designing, business, political, intellectual and public responsibilities at the same time managing to keep a tempestuous loving marriage and home together in the face of outrageous pressure from Rossetti is an achievement unlikely ever to be repeated.  For me William Morris is a true Renaissance man who elevates everything he touches and who puts his learning to both artistic, practical and moral intent.

For Ann it is William Morris’s skill in textile design, weaving and understanding of materials that has inspired her now fifteen year passion for the time and design intensive art of quilting. She has produced over thirty quilts of varying sizes but her magnum opus to date is the heirloom quilt she made for her niece Sarah Lang, also an artist and a teacher of Art as well as a talented musician and event entrepreneur. The particular challenge of this quilt is that each square of flowers was hand appliquéd and indeed, all of Ann’s quilts have been worked by hand. The design for Sarah’s quilt is based on Jane Morris’s handworked quilt which can be found in Kelmscott Manor (currently for some reason on William Morris’s bed!)  The similarities between the quilts can be clearly seen in the attached photos.

Clearly yesterday’s visit to Wightwick Manor and today’s journey to Kelmscott meant a great deal to both of us.  May and Jane Morris embroidered the following poem around William Morris’s bed canopy as can be seen in the photo above. I think the poem speaks for the man. 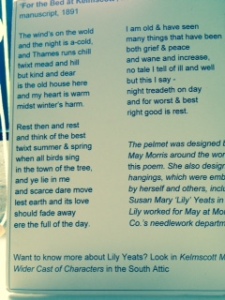