Today we headed south east from Chippenham past the thatched rooftops of the homes of ancient Laycock and its even older abbey and later on past the even more ancient stones of Stonehenge to the relatively “new” C16th house of the Herberts, the Earls of Pembroke. 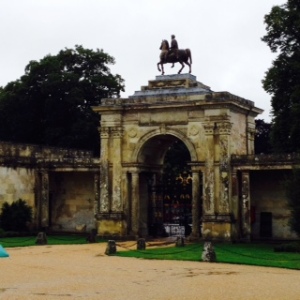 Wilton House, the Pembroke Estate with flag flying from the front 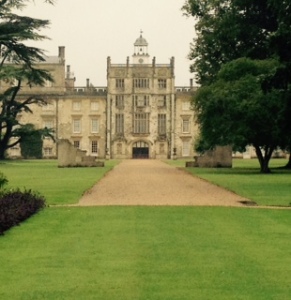 Wilton House the old (and preferred in my view,)front aspect.

Once again it is the homes of families who have somehow been able to maintain hereditary continuity who have most been able to cope with the vagaries of political religious upheaval and C20th Government taxation/death duties policy. The Herberts have hung on in Wilton House, very near Salisbury although they have had their moments as did many other royalist sympathisers during Cromwell’s Commonwealth.

Ann in the front formal garden at Wilton House

The current Earl and Countess of Pembroke are a young couple with young children and a youthful approach to “Stately home leadership”.  They open the house and gardens regularly for charity and hold many functions of various types on the property. They also refuse to “rope off” sections of the State and other rooms so when paying visitors come they don’t feel “kept out” of the rooms but are able to freely walk around. Indeed all of the house is still used by the family and apparently the family can often be seen mingling with the visitors. We were not sure if that was the case while we were there. I think it may have been possible. Another impressive feature was that special exhibitions were not charged at an additional rate.

On our visit two exhibitions were open as well as a professionally made film of the history of the house which was quite outstanding. The exhibitions were firstly, the current Earl of Pembroke’s fast car collection and secondly an exhibition of Cecil Beaton’s photographic works. Cecil Beaton was an English fashion, portrait and war photographer, diarist, painter, interior designer and academy award winning stage and costume designer for films and theatre. He also often photographed the Royal Family for official publications. The cars were to die for and some have been successful in races. 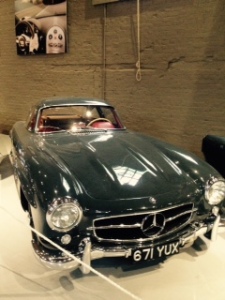 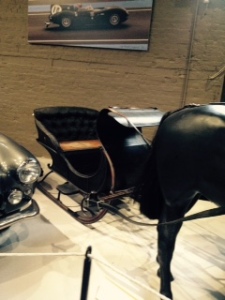 Wilton House is perhaps the most wonderful piece in all Wiltshire’s heritage of domestic architecture. Formerly an abbey and later designed at various stages by Holbein the Younger, Inigo Jones, Watt and Wyatt, with its cube rooms and the crimson velvet curtains, with its fantastic Palladian bridge and the lawns flanked with cedars of Lebanon, its gardens where Shakespeare acted and Philip Sydney wrote “The Arcadia”, Wilton is at every time of the year , in all weathers , unfailing in its beauty.

I can’t add to this except the impressive collection of paintings (Rembrandt painting of his aged mother, the largest collection of van Dyke portraits in England, Brueghel the younger and older, Titian, many Italian Renaissance paintings, over 100 classical busts and so on), the pair of Fred Astaire shoes, the wonderful Japanese inspired water garden and the wonderful front gate with a sculpture of Marcus Aurelius atop the gate!  Shakespeare did have a special connection with Wilton House and the house has a history of dramatic performance. Like many British stately homes Wilton was used as a hospital during World wars.

Once again photography was not permitted inside the house so no serious pics inside. The gardens and cedar lined lawns are to die for and the quality of the internal presentation of the house  has few peers. 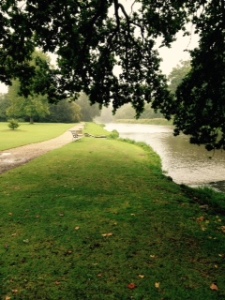 The Wylye River running through the gardens of Wilton House 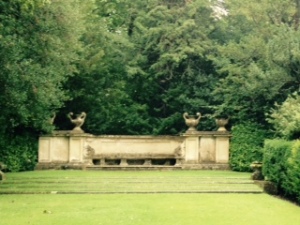 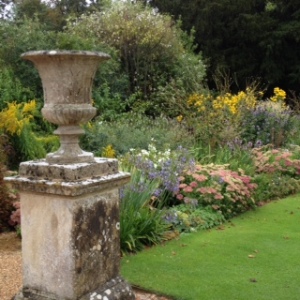 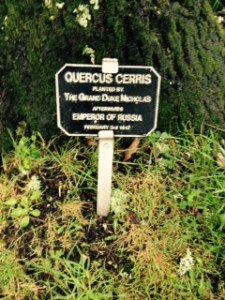 Palladian bridge over the Wylie River (nicer on a sunny day) 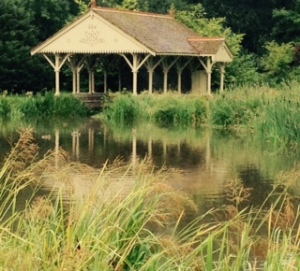 Summer house at Wilton on the Wylye River

swan and cygnets on the Wylye River at Wilton House 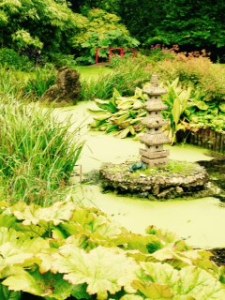 A small highlight for me is that in one bookcase in a drawing room Ann spotted  two beautifully bound volumes of the Revd Humphrey Prideaux’s Prideaux’s Connections. Humphrey Prideaux was a distant ancestor of mine and became the Dean of Norwich. I have a copy of Prideaux’s Connections, found for me by the late Bishop John Wilson, much less grand than the two volumes in Wilton House. The work is a scholarly attempt to relate the the Old and New Testaments theologically and historically. It was good to see them there. 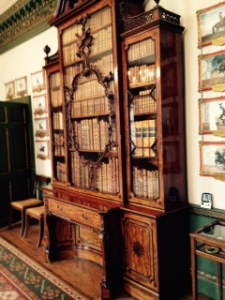 found in this bookcase, well spotted by Ann

2 Responses to Wandering around wondrous Wilton House near Salisbury