Today we drove with Ann’s cousin Joyce and her husband Brian from Frinstead to the extraordinarily well preserved C14th Gothic stately home Penshurst in its own village of Penshurst high up in the Weald of Kent. This vast house was commenced in 1341 by Sir John de Pulteney and survived the Black Death, the peasant’s revolt and the hundred years war all in the hands of various Dukes of Bedford, Gloucester and Buckingham, the third of whom Edward Stafford fell out with Henry V111 and was hanged for treason leaving the Estate in the hands of the crown. Henry V111 used it as a hunting lodge and a place from which to woo Anne Boleyn.

Ann, Brian and Joyce at the entrance to the Gothic Baronial hall at Penshurst Place in Penshurst Kent 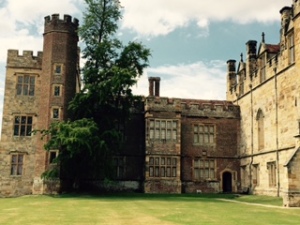 External view of part of Penshurst Place ..too large for iPhone photography

Part of the exterior of Penshurst Place taken from the formal parterre gardens.

Another view of the exterior of Penhurst Place in Kent

Eventually the Estate came to Edward VI after Henry’s death and he rewarded his tutor and Steward of his household by handing it over to Sir William Sidney. The House has been in the Sidney household ever since…remarkable continuity for such a stately home and its Tudor apartments are still used by the 2nd Viscount De L’Isle  Phillip Sidney and his wife Isobel. Phillip is the son of William Sidney , the first  Viscount De L’Isle and the former Governor General of Australia.

The Capital of New South Wales is named after this family of whom perhaps the most famous is the Renaissance scholar, poet, soldier and courtier Sir Philip Sidney, of whom C S Lewis in his role as Renaissance historian and literary critic writes: Even at this great distance Sidney is dazzling. He is that rare thing, the aristocrat in whom the aristocratic ideal is really embodied.

This remarkable estate sits in 2.5 thousand acres of pasture and forest high up in the Kent weald and the family own effectively the whole village of Penshurst, St John the Baptist’s Church and the vast house and garden. Once again no photography inside the house is allowed so no pics of the interior which is a pity because the house is entered through a front door leading to a Baronial hall of monumental proportions…timbered ceiling trusses and original huge roughly hewn C14th banqueting tables.  A small crypt contains the costumes used for the filming of the BBC production of Hilary Mantel’s Wolf Hall which was created at Penshurst in 2014.

View from the top of the parterre garden over the surrounding countryside around Penhurst Place. The view from the battlements and upper storey would be superb. 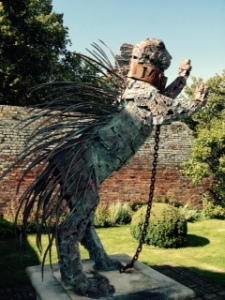 Porcupine statue in the Penshurst Gardens. The Porcupine is part of the Sidney family crest and identification.

The State rooms begin with a vast dining room set with an unknown but early service, family  and royal portraits including James !, Anne of Austria and a copy of Van Dyke’s portrait of a mounted Charles 1, the original being in Buckingham Palace.

Several drawing rooms follow with early and magnificent furniture, a substantial Chinese porcelain collection, early tapestries; complex early embroidery, unusual European cabinets and tables of all  shape and sizes, and paintings from a range of periods but all rare and unusual, nothing can be taken for granted. The Long Room again has many family portraits and leads down a narrow stairway to a small panelled bedroom with again significant paintings and furniture. The Nether Gallery includes a substantial collection of arms and armour.

A feature is two exhibition rooms with a photographic gallery of the last 150 years of the Sidney family including many significant historic events and the damage to the house in World War 11. The photos are kept up to date and help viewers to understand that Penhurst Place is still a living and lived in home.

The gardens are quite remarkable and beautifully tended by a team of gardeners. There is the formal lime tree entrance drive,  a formal parterre garden with a beautiful oval pond well stocked with golden fish.  Terraced down the hill the gardens include wonderfully productive fruit trees of all kinds, large topiary gardens, a substantial rose garden, the heraldic garden, the nut garden, the magnolia garden, many paths with impressive herbaceous borders, Union Flag garden, Diana’s bath and the Porcupine statue. 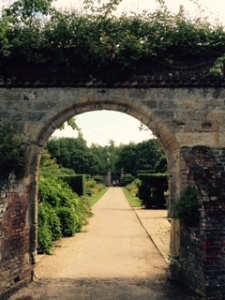 View of the terraced gardens at Penhsurst

One of hundreds of floral displays at Penshurst Place 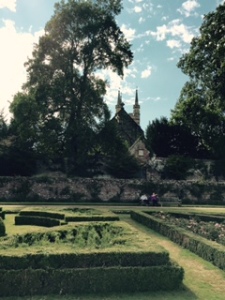 St John the Baptist Church from the formal parterre garden

Penshurst Place, another view of the Heraldic Garden

Penshurst Place is a personalised dwelling of peace and tranquility in a beautiful weald setting with wonderful views all around. It is an exceptional achievement to have house and gardens lasting 600 years through largely one family and a fine tradition of expert gardiners.