Spirituality and Portraiture in London

Today we took it quietly in the morning after five days of quite hectic activity. We slept in; organised a date with Beaconhills staff colleague Amara Jensen who is also on leave in London; caught up with some overdue washing and generally rested our aching feet and backs!

We had the privilege today of worshipping in English!  for the first time in six weeks, not once but twice in two very different settings both with congregations of over 500.  The first was the 11.30am Sung Eucharist at St Paul’s Cathedral in London. What a privilege to worship in this place where folk have gathered for 1400 years in one building or another and in this building which through heroic efforts of staff and fire-fighters survived the bombing raids of the Battle of Britain. 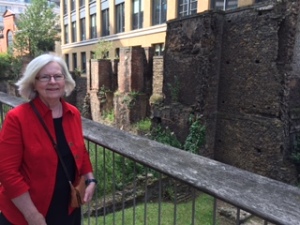 St Paul’s Cathedral interior at the close of the 11.30am sung eucharist

Inside the mighty dome of St Paul’s Cathedral London

The choir for the service was a visiting all female choir, Aurora Nova, because the Cathedral choir is on a Summer break. The choir was superb and they sang arrangements by the ‘Oxford’ composer Cecilia McDowall who is ‘composer-in-residence’ at Dulwich College London. Her music for the Communion Service has been described as having a freshness, brightness and fidelity about it, combining flowing melodic lines and occasionally astringent harmony with rhythmic vitality.  That’s exactly as I found it and a wonderful aid to meditation and worship. The voluntary was an amazing Toccata from Symphony No 1 by Rachel Laurin (born 1961). A magical piece well received by the congregation. The organist was not named in the service notes.

The Preacher was the Reverend Paul Arbuthnot, a “minor canon”  of St Alban’s Cathedral who preached on the Gospel for today..John 6:51-58 “Unless you eat the flesh of the Son of Man and drink his blood, you have no life in you.”  In a service occasionally interrupted by backpackers and family groups lurching around oblivious to a service being in progress I thought he did a brilliant job reminding us of the advertising slogan “You are what you eat!”  Yes, Jesus may have been referring in some pre-emptive way to the eucharist but the eucharist is no use to us if our lives are not reflecting our spiritual bond with Jesus, who he was, what he taught, and how we live the faith we profess. It was clear, concise and to the point and we appreciated it especially after  a drought of teaching in the last month. We were greeted warmly by the preacher as we left the service.

Holman Hunt’s portrait of Revelation 3:20 …one of three he painted This one in St Paul’s Cathedral London

The second service we attended today was the 5.00pm service at Holy Trinity Anglican Church in Brompton, once again with well over 500 in attendance at this 1829 neo-Gothic parish church in the middle of London’s Sloane area near the Victoria and Albert Museum. This parish of course has been made famous by the outreach media work of its Vicar and leader Niki  Gumble of Alpha fame. The church has three other centres and has planted upwards of ten new churches in greater London.

Other than the ancient feel of pointed arches, wonderful frescoes in the sanctuary and beautiful stained glass in the East wall windows there could not be a greater contrast in the worship.

First of all it was an outreach service very directly aimed at the younger set (although the congregation consisted of quite a few greybeards like us!)  A vast high screen filled the front of the sanctuary and a very bright light show illuminated the whole sanctuary making St Pauls’ rather dainty candles look a little pale.  No photography was permitted so I cannot illustrate this service.

Beneath the screen right on 5.00pm  miraculously appeared a substantial rhythm band fired by an even more substantial sound system and after a brief opening prayer we moved quickly and emphatically into a series of Gospel songs enthusiastically taken up by the congregation.   At Berwick Anglican we are used to a good sing at the start of the 10.15am service (nearly always two songs and an outstanding band and singers).  But this was something else again…sustained singing of six songs which included free singing and the creation of a mood of seriously asking the Holy Spirit to be present in and through the whole service. It was powerful and strong and made a significant impact on many present who seemed to know what to expect and what to do as did our niece Naomi with whom we went to the service.To us as outsiders it was demanding but also helpful although (again as an outsider, maybe too long! especially after a long day. If I was 17 I wouldn’t have cared!)

After readings and an intercessory prayer the sermon was given by one of the Parish curates the Revd Rob Hall and  was based on an exegesis of Psalm 27 ..David facing overwhelming enemies but trusting God and going to God first rather than going to arms. Rob’s theme was fix your focus and feed your faith and his presentation was equally communicative as the morning service, establishing a real intimacy with the huge congregation (which sits in two levels upstairs and downstairs) and using no notes but very clever AV and online illustrations.  At the close of his address there was a call for conviction and repentance and a significant number of people responded. The service closed with more vital singing and a blessing.  We thoroughly enjoyed both services even though they were at opposite ends of Anglican expression. For me personally the joy of Anglicanism is the breadth of its worship and I would dearly love to see greater love and understanding shown by both sides in our very polarised Melbourne Diocese. Each type of liturgy has much to offer different types of people. Viva la difference!

In between these two services we visited the  very impressive (and free! yippee!) National Portrait Galley near Leicester Square. It was so exciting to see so many of my favourite people in wonderful portraits both modern and ancient.  Photography is difficult and I know I should be giving credit to the artist rather than the subject but most were unknown to me so I focussed on the people being painted. I did note what a successful portrait painter pre-Raphaelite John Millais came to be.  The photography is dodgy but I include a few. The highlight was the tiny drawing of the reclusive Jane Austen, carefully encased in glass and impossible to photograph.  Here are a few of my heroes in no particular order! 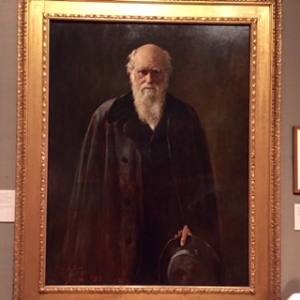 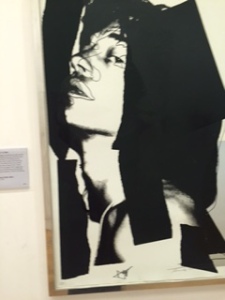 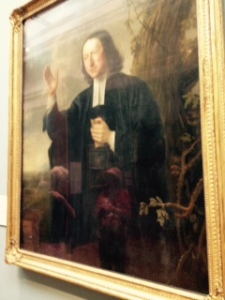 Thomas Arnold of Rugby School and father of Matthew 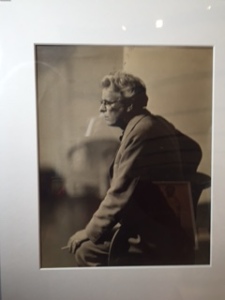 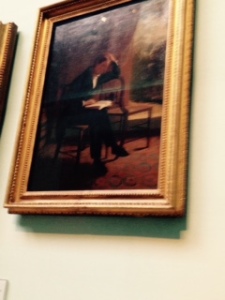 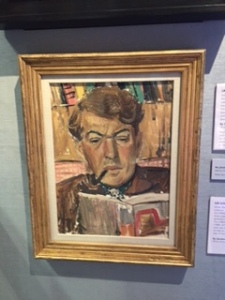 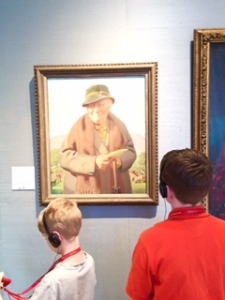 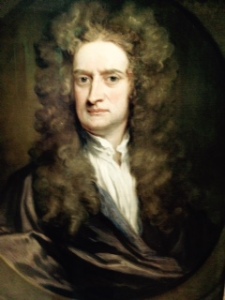 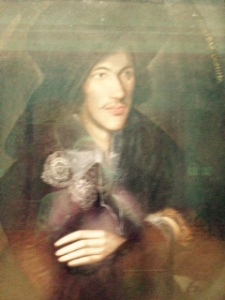 NIcholas Pevsner who wrote so much about English Cathedrals, Stately homes and English and European  architecture in general and has influenced me greatly

William Wordsworth was missing and the staff member agreed there was a portrait and it was probably on loan.