Ambling in Amiens and running around in Rouen

Thursday 6 August Today we left Ghent and took a 3 train link through Brussels and Lille in France to arrive in Amiens only to find our car was at a second Amiens station 45 minutes away. on a TGV train line totally different to ours and in any case the office in Amiens was closed until 4.00pm! We were saved by a complete angel in the garb of a female railways officer who stayed with us, showed us a where a second Avis office in Amiens was located and pointed out how we could see the Amiens Gothic cathedral on the way which was only two blocks from the station. She was amazing and said we were the second Aussie tourists to be stranded without a car by the confusion between the two stations. We trundled our luggage through the streets of beautiful Amiens to the amazing Amiens Cathedral. 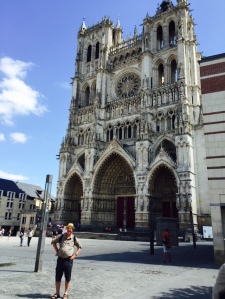 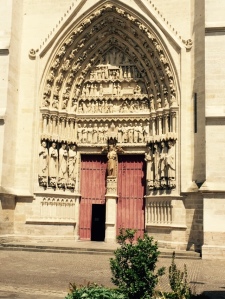 iPhone photography again cannot deal with the complexity of these massive buildings. The detail, the tracery, complex carving even though much of it will never be seen is overwhelming.

This is an iconic Gothic cathedral, early, with substantial later additions but retaining a Gothic purity which in my view should not be too much interfered with. An example of such interference at Amiens is the C19th striking addition to the high altar.  Obviously some changes need to be made with technology e.g. stained glass and organ engineering. Ancient carving of Biblical and other themes is everywhere in this cathedral. I have long wanted to see this cathedral up front and personally and it was a privilege to be here and soak up the ambience of this historic site. 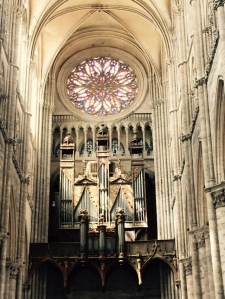 Rose window in the Crossing of Amiens Cathedral France 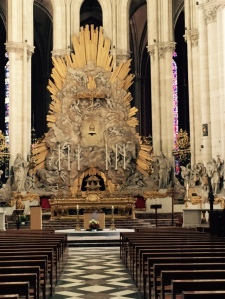 Extraordinary C19th addition to the high altar at Amiens Cathedral France. You either love it or hate it. I would give it a miss!

Part of the interior decoration above the high altar in Amiens Cathedral. It is always frustrating not to be able to relay the stained glass window impact

Tiny part of the many exceptional carvings found in many places in Amiens Cathedral. It would take a year of study to disentangle them all 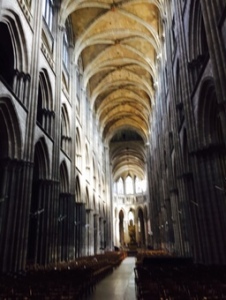 Interior nave of Amiens Cathedral from the rear of the nave. Gothic purity!

After viewing the cathedral, we then continued to the Avis office where we stonewalled long enough for them to come up with another vehicle even though initially we were told “we have NO cars…you’ve come to the wrong place!”  Finally they realised we were not going away and they came up with a beautiful tiny Fiat 500 which looked smaller than our pile of luggage but we and the luggage squeezed in.

Fiat 500; Fantastic little car to drive. I prefer it to the small Audi..easier to handle and very powerful. A dream to drive and amazing what you can fit in it. e.g. All of our luggage and us! Here it is in Blois parked incorrectly in a one way street. Very European if I may say so!

We took off for Rouen where we found an equally amazing and ancient Gothic cathedral right in the middle of town.The town had been flattened during the war but miraculously most of the cathedral survived. Rouen is even more purely Gothic than Amien. The nave is surrounded by ancient statues including Joan of Arc; there is some stained glass but it is a quiet and somehow personalised cathedral.  These ancient testimonies to Mediaeval faith and commitment are inspiring in the extreme although there are still questions about the impact of the church in France today. 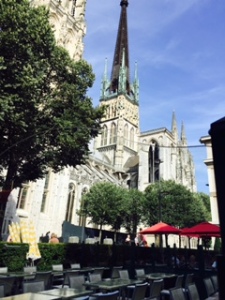 Rouen Gothic cathedral right in the middle of a very modern town now, most of it having been flattened in WW11

another view of the cathedral exterior

Display showing the extent of WW11 damage in Rouen with the Cathedral relatively unscathed whilst all around is flattened. 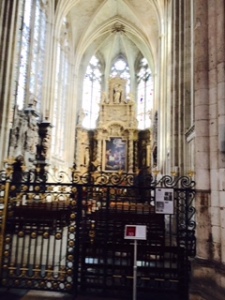 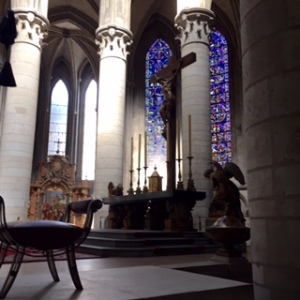 Elegant stained glass in Rouen Cathedral behind the main sanctuary; Photography does not do it justice

Joan of Arc statue ..a heroin of Rouen

Memorial to Richard Coeur de Lion at Rouen Cathedral . His body is buried in the family vault in Aquitaine.

From Rouen we hit the highway again to Mont St Michel on the northern coastline. The countryside in Bretagne is green and cropped and not as heavily settled.  Mont St Michel is France’s most popular tourist destination outside of Paris so the highways were brilliant and the Fiat 500 kept up with the best except on the hills. Mont St Michel is a monastery perched on a tidal island off the coast and the sight of it emerging across the sheep paddocks in late afternoon is unforgettable. We were booked in an old farmhouse well and truly updated to become the Auberge de la Baie with an amazing cuisine  and wonderful hosts. The whole area is rural and peaceful, a massive change from the huge and busy cities we have been visiting. We enjoyed this stay very much and could have happily stayed for a week and walked and just soaked it all up. This has been an absolute highlight.

Mont St Michel sheep running past our room early next morning. This is a rural paradise 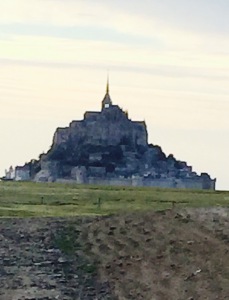 2 Responses to Ambling in Amiens and running around in Rouen