Getting around in Ghent again

Today we are having a lay day! We have been well aware what a cold and difficult winter it has been in Melbourne. As I write I see it is only 5 degrees in Melbourne and I am feeling guiIty for whingeing about the 40 degree days we had in Florence. I am grateful to the many patient  folk who faithfully wade through the waffle I send out over the airwaves. The truth is that if I didn’t write the blog every evening the whole exercise would become a blur and I would be struggling to remember where  we travelled and what we had seen and done or even who I am!

Today we slept in and provided our own breakfast as we have each day at the Ghent Marriot. It is a wonderful hotel but we have provided four breakfasts from the supermarket for less than the cost of one breakfast for us both in the hotel! It was good to answer emails at length, laze around and not feel any pressure to be anywhere in particular, face time family and eat chocolate!

We eventually emerged to wander the streets of old town Ghent again. It is full of winding lanes, substantial squares, exceptionally well preserved old homes, grand old churches, beautiful canals and not too many tourists.

View from the glass internal lift well of the Hotel, the Ghent Marriot

Someone has to eat this desert …oh well…

This photo from the bridge over the canal highlights the carefully planned architectural relationships seen in Ghent old town. 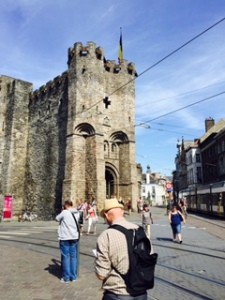 Another view of the Castle of the Counts in Ghent

In all of the European towns we have visited we have enjoyed wonderful  music from street musicians both solo and in groups including violinists on the Acropolis, male voice choirs in Venice,  funky folk groups in Strasbourg, exceptionally talented classical music water glass players, two classical clarinetists in Basel, a tuba ensemble in Florence and today a real first, a violumpet player  who played magnified classical music of a very high order.

Ghent not only has an impressive breifmarken shop but also as I found today, an exceptional vintage toy shop run by a young man selling his father’s collection! It contains the largest collection of vintage toys I have ever come across including a collection of over 800+ Dinky Toys, both English and French. I have been collecting these little cars/trucks/vans/buses all my life but I have never seen anything like this, not even in the substantial collection in the Camberwell Antique toy shop. Unlike Camberwell, the shop was somewhat chaotic but that made the treasure hunt even more exciting. It is probably a good thing we are leaving Ghent tomorrow.

Couldn’t have a blog without one church. This is massive old Gothic St Michaels, in Ghent. A beautiful traditional Gothic church which we tried three times to get into but failed each time. Through the glass doors it looks like a very early, high and severely beautiful Gothic space alongside the canal