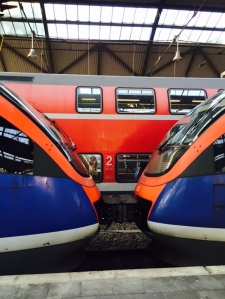 The Ghent Marriot ..our little pad in Ghent..not our normal gig on this trip but a welcome respite after five big weeks on the road.

This morning we trained for an hour from Aachen to Brussels on the amazingly quiet Paris Nord super train and another 30 minutes in an extremely crowded local train on to the well preserved and war protected mediaeval city of Ghent, birthplace of the Emperor Charles V and until 1500 the largest city in Europe except for Paris. We are using Ghent as our Belgian base for three nights and have landed in the Mariott Hotel right on the canal. I have to say this hotel has not been typical of our pre-booked trip but (thanks again Moranda from Helloworld Belgrave), we are certainly enjoying the large room and high tech facilities.

Of particular interest to me, apart from the sensational and very large old town and the briefmarken shop is of course the mediaeval painting by Hubert and Jan Eyk entitled The Adoration of the Mystic Lamb,  (1432) , a complex and very beautiful altar piece which is kept in the late Renaissance Gothic cathedral of St Bavo. Panels of the painting are currently being restored. The painting has attained iconic status because of its intrinsic beauty, especially the face of the Virgin Mary, its interesting theological centre painting Christ as an actual lamb, the diversity of the groups who come to worship the lamb and last but not least because it is just about the most stolen of all major art works. It survived Protestant iconoclasm, was taken to France by Napoleon and then returned, requisitioned by Hitler during WW11  but one section “the Just Judges” panel was stolen in 1934 before the war and has never been returned.  Photography was very difficult because of the crowd but the painting is readily found in books. 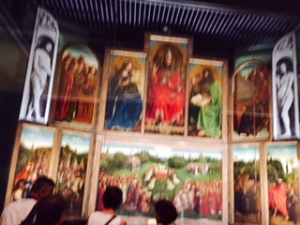 Hubert and Jan Eyck altar piece: “The Adoration of the Mystic Lamb”, 1432

St Bavo’s Cathedral itself is, in my view, an impossibly tragic mix up.  A noble austere and plain Gothic church with a beautiful frescoed crypt  has been “baroqued”  or “rococoed” beyond belief. The extraordinary  white marble pulpit representing the triumph of truth over error (C18th) and the C18th high altar with candlesticks donated by Napoleon to me destroy the architectural unity of the interior. The exterior is swathed in scaffolding so no pics.

St Bavo’s Cathedral in Ghent. Late Renaissance Gothic and in this photo looking quite traditional 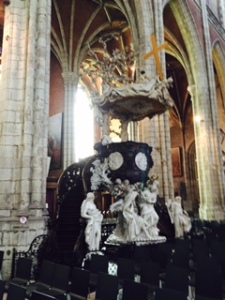 Pulpit in white marble from Cararra and Danish oak by L Delvaux (1696-1778). It represents “Triumph of truth over error”. 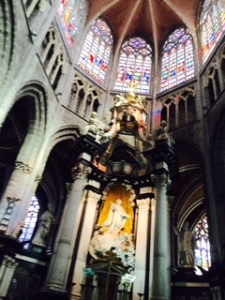 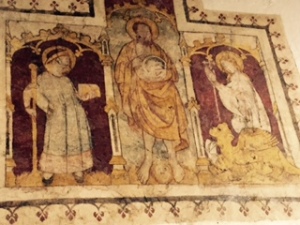 Interesting ancient frescoes in the huge crypt of St Bavo’s Cathedral in Ghent. The crypt includes a large and very peaceful worship area with its own separate entrance from the street. 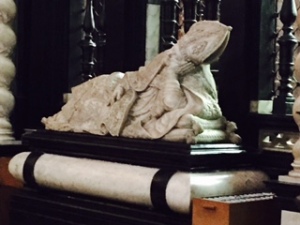 A very relaxed bishop in his tomb in the sanctuary of St Bavo’s Cathedral Ghent.

St Nicholas’ church, not far from the Cathedral has been similarly “Baroqued” but in a bizarre twist, one half of the church has been left untouched Gothic and the other (in my view) ruined by Baroque.  Others will need to be the judge of the value of Baroque religious architecture.

St Nicholas’ church in Ghent..the Gothic “half” separated by a glass barrier from the Baroque half 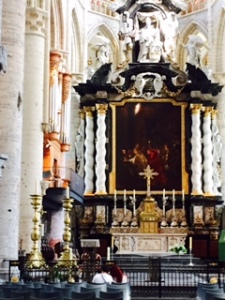 Ghent is a friendly city where many people have English alongside their Flemish/German/Dutch/French whatever else. It is highly ordered, has lots of high tech and modern art, is  elegant, has loads of chocolate and other sweet things and the people who live and work here are, I think, very lucky to do so.

“The big toilet paper”! Only in Ghent!

Another view of “the big toilet paper”!

Ghent old town on the canal and Richard holding his latest “briefmarken” find. 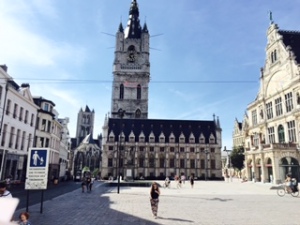 Another view of old town Ghent