Painting by C20th artist Pietro Annigoni in San Lorenzo church Florence. A welcome modern touch in a quite traditional interior.

Ceiling of Principal Medici chapel in San Lorenzo Florence. Vast and over the top is the only way to describe this chapel

Today, as a final attempt to see the Renaissance through Florentine eyes we ventured just down the street from our hotel to San Lorenzo church, the parish church of the Medici family which also contains as an ‘add on’ the extraordinary tombs of the Medici leaders.

The church itself is another huge classical Renaissance effort, Gothic in general style, with an unfinished front in spite of the Medici “wealth” (which like modern governments was often an illusion..artists were  often commissioned, delivered, and then not paid…princes often paid debts with borrowed money only to have to go into debt again when their own debts were required of them.  There is evidence that the Medicis were not so much patrons of Renassance art as encouragers and supporters but did not actually have the money to commission.

All this fits with the chapels which, although in part richly decorated, some would say garishly decorated, were never finished. In fact the beautifully inlaid polished stone floors were not completed until Medici descendants paid for them in the late C20th.  Whatever happened to the Medici wealth seems to be unknown but it disappeared as did most of the quite famous jewellery. In addition the exorbitant decoration of walls with inlaid polished stone and and oversized tombs themselves in the Capella dei Principe have all been stripped of their greater than life-size images except two of them.

Extraodinary size of Medici tombs in the Capella dei Principe ..the principal chapel of the Medici family. As can be seen this one has “lost” its life size image which should be ins place above the wooden casket

The other sad part of these Medici chapels, and the museum set up to attract fee-paying tourists is the rather horrific cabinet after cabinet of expensive pure silver monstrances, pyxes and other reliquaries holding bits of mouldy bones and other doubtful historical oddities. They seem to reflect in my mind a complete rejection of the simple moral simplicities of the Gospel and an objective visitor in my view can only come away from these chapels with a sense, if not of horror,  at least a sense of the complete inappropriateness of the attempted elevation of Medici significance and power in some future arena when “first shall be last and the last shall be last”. There is more meaning to be found I think in the much smaller “New Sacristy” which contains Michelangelo sculptures in memory of the Duke of Urbino, grandson of Lorenzo the Magnificent, and the simple tomb of Lorenzo the Magnificent himself.

As to the church of San Lorenzo it is one of the earliest and in a way, most straightforward of Florence’s Renaissance churches. The decoration is subdued, mainly massive early devotional works of art.  The side chapels are also subdued and the central altar is beautifully marbled but not excessive. Donatello’s bronze  pulpits in the nave are not excessive and the only major fresco is a large work by Bronzino depicting the martyrdom of St Lawrence. A striking painting by C20th Pietro Annigoni showing a young Jesus in his father’s workshop is certainly one of the best things I have seen in Florence.

Three sculptures by Michelangelo in the New Sacristy of the Medici Chapels in San Lorenzo Florence. This room was peaceful and quiet after the hectic triumphalism of the Principal chapel. In this quiet space are the relatively unadorned tombs of Lorenzo the Magnificent himself and his murdered brother Giuliano (C15th) 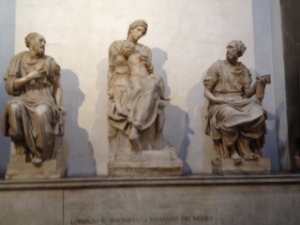 Signed Michelangelo sculpture (middle statue) in the New Sacristy of the Medici Chapels in San Lorenzo Florence. Vasari put these statues over the very plain tomb of the Duke of Urbino (Lorenzo the Magnificent’s grandson) 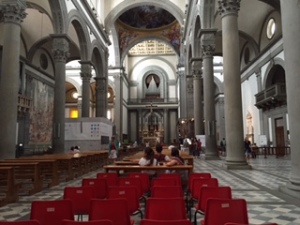 We left Florence in mid-afternoon with the temperature again rising to 34 degrees and the unrelenting humidity and crowds still swelling.

Our journey took us by super-fast frecciarosso train from Florence through Bologna to Milan with a quick change of trains to an inter-city express through the tranquil lake district of Lakes Maggiore and Com0 into the still snow-clad alps and mountain towns of northern Italy through the Simplon Pass and down through  a very long tunnel into the wooden chalets and red shuttered dwellings of Switzerland. We travelled through Berne at 10.00pm and arrived at Basel at 1o.45pm and happy to see our hotel and be asleep by midnight after quite a long day!

Ann asleep on train to Basel after quite a long day! We arrived in Basel at 10.45pm and just as we walked out of the station a taxi pulled up..the only one around at that hour!