We woke to our first cooler day since we came to Italy with the temperature around 30 degrees. The papers here are saying 2015 is shaping to be southern Europe’s hottest summer for 30 years so we picked it! After a slow start as both of us had a restless night with noisy neighbours we mooched off to the southern end of Florence again to track down the Brancacci Chapel. 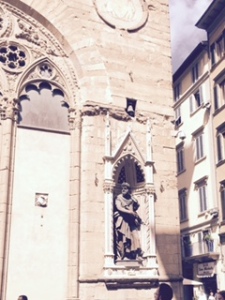 Orsanmichele church in Florence, formerly a grain market! Donatello sculpture of St George, one of 14 sculptures around the exterior 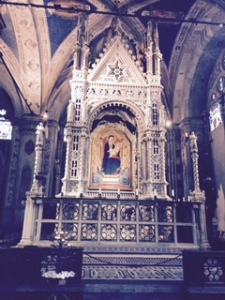 On the way we visited the Orsanmichele Church in the Via de Calzaioli which was formerly a grain market but in the C14th was converted to a Church. The arcades of the former market were bricked up but in 14 niches around the exterior sculptors were commissioned by guilds of the day to add some class to the external appearance.  Donatello, Verrochio and Ghiberti were among those who contributed sculptures. The internal appearance is simple with some impressive stained glass and an elaborate high altar with works by C14th and C16th artists.

The Brancacci Chapel is part of the Carmelite convent church of Santa Maria del Carmine in a working class and residential area of Florence south of the Pitti Palace. Entry into the large church is not permitted but the Capella Brancacci chapel which  is open to visitors and is frescoed largely by Massachio, having been begun by Masolino and in the way of these things finished off by Filipino Lippi.  The major frescoes tell a complicated story of the life of Peter following the resurrection but the sequence is not coherent although the frescoes have been well preserved . 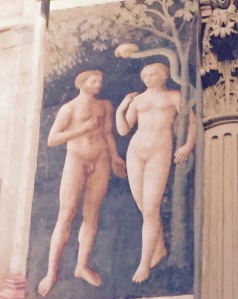 Brancacci Chapel Carmelite Monastery Florence; Massachio fresco of Adam and Eve before the “Fall” but thinking! 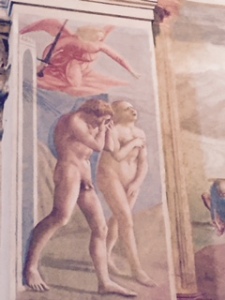 Massachio fresco of Adam and Eve after “the Fall” in Brancacci Chapel, Carmelite monastery Florence. These genuine expressions of despair and grief influenced the work of Da Vinci and Michelangelo 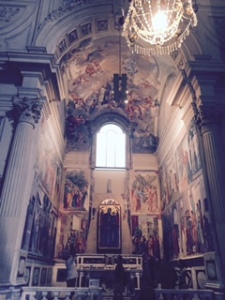 The major interest is two facing relatively small panels of Adam and Eve on the edge of the chapel, On the right hand side facing the altar is a healthy and happy pair of humans but a bit edgy about the tempting offering  coming between them in the form of a serpent.  The facing panel on the left has Adam and Eve leaving the garden in complete despair having earned God’s displeasure by their disobedience.  Their  powerfully graphic expression of sorrow and anguish was unique in its day and it is said that both Da Vinci and Michelangelo came to see these frescoes and to learn from Massachio’s technique. They still have great power to communicate after all this time but they are certainly overwhelmed by the surrounding Peter frescoes. 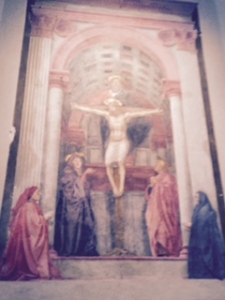 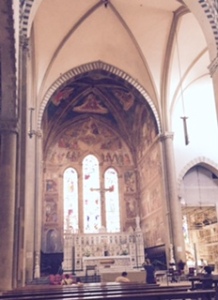 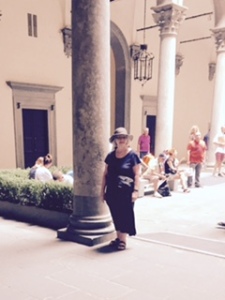 In the afternoon we walked the streets and lanes of Florence along the Fiume River and into the high end shopping centre of the Via De’ Tourabuoni which would give 5th Avenue New York more than a run for its money.  There were some seriously amazing shops including a porcelain shop with its own internal rooms and garden, more like a palace than a shop. It was siesta time so two vast churches were passed over…San Trinita and a huge church next to the equally huge Palazzo Strozzi. Each floor of this vast palace is about 3 times the height of a normal floor in a building.   One church which was open was the even larger Church of St Maria Novella with its own equally large frescoed Chapter House and other now museum buildings. The original Romanesque church was doubled in size by Alberti with a Gothic addition and contains two frescoed Strozzi chapels and many other impressive chapels and paintings. Massachio’s fading but still impressive Trinity is here with its carefully hidden Holy Spirit dove looking a bit like the Father’s collar!

This was a long walking day for us and we were happy to seek refuge in the air conditioned comfort of our room.