Ann was in shopper’s paradise this morning wandering the narrow lanes of mostly clothing and fashion shops and Richard did not miss out finding mouth-watering ancient book shops and not one but two stamp shops including one actually making a living in St Mark’s piazza. The extraordinary paper/leather/book shops are a frustration because the vast majority of all the beautiful leather bound volumes are of course in Italian.

We found our way quite easily to the waterfront and the amazing views from the island across the mouth of the Grand Canal to the Salute church. The slightly lower temperatures and the sea breeze made walking much more comfortable. St Mark’s, surely just about the most distinctive of the world’s Christian cathedrals looked fantastic as ever but like many building icons is undergoing partial restoration getting in the way of that perfect photo. 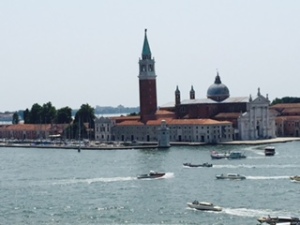 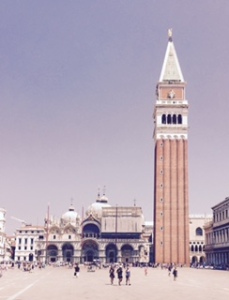 Richard actually waited in the queue for just the third time in his life to get into the Doge’s Palace (the first time was the The Tower of London and the second was the Musee D’Orsay in Paris). Over the years we have already seen some extraordinary palaces in St Petersburg, Versailles, The Schonbrun, Charlottenburg, The Alhambra and the Vatican and we are looking forward to Buckingham Palace on this trip. The Doge of Venice’s Palace is right up there and much of the detail is on the ceilings of some of the largest Council and meeting rooms in Europe. Photography fails to grasp the magnitude of some of these paintings and moulded and painted ceilings and the complexity of the subject matter which mixes up  Christian, classical and Venetian history is not for the faint hearted. Paintings by Tintoretto, Tiziano, Veronese, Carpaccio and many other Venetian artists adorn the walls of these amazing rooms with subject matter too difficult to master in one visit. 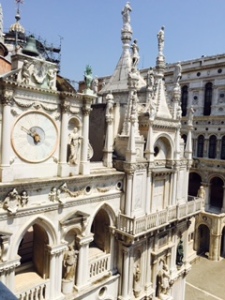 Doge’s Palace Venice; one of many painted and crafted ceilings with extraordinary painting and woodwork and gilt. The ceilings and the rooms just became vaster and vaster as we proceeded through the palace

Inside beautifully restored colonnades of the Doge’s Palace in Venice 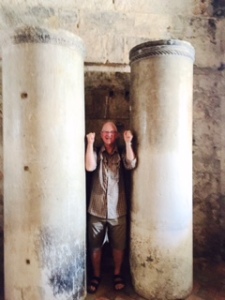 Columns from the original Doge’s Palace in the museum on the ground floor. Richard is no Samson! 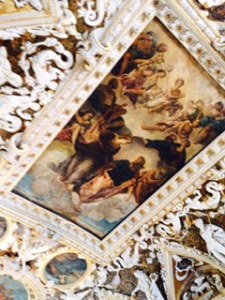 The ground floor includes collections of the original columns and capitals of the first palace long gone,  and up front and personal they are simply huge.  The actual state rooms just keep getting larger and larger until the massive Council room where all the Italian nobles of the day gathered once or twice a year to keep an eye on the Doge and perhaps elect a new one (over 2000 of them in one sitting and a Council room to match and paintings to match. As in Mantua the palace is surrounded by cultivated gardens of peaceful shade, this time added to by the many canals passing through and around the palace. The weaponry and armoury rooms complete with knights in full armour on horseback, crossbows, every conceivable sword and pistol and a multi barrel shotgun were actually quite a shock to see the brutality and power of some of the weaponry.

Contrasting this magnificence, power and brutality  was the quite exciting  journey through the dreary passage ways of the  prison including the tiny bridge of sighs inside the palace where allegedly the prisoners sighed with horror contemplating their very imminent abode in the Doge’s dungeons.

The ticket includes the Correr Palace and Art Gallery with its elegant Hapsburg Baroque rooms and amazing art gallery of Venetian art (Tintoretto, Carpaccio, Tiziano, Veronese, late mediaeval and the extraordianary sculpture skills of Canova  as well as non Venetian artists including a large Bellini collection  and many others and in addition a massive classical archaeological museum and extraordinary numismatic collection;  The palace itself is a masterpiece of refinement contrasting with the sheer brutal power of the Doge’s Palace.  Curiously the New Zealand biennale exhibit of seeing the world  upside down from their point of view was still on show in the final amazing room of the Correr making a sharp contrast between painted mythological surrounds and the latest in technological whizbangery.

Correr Museum, part of the Baroque addition to the Doge’s Palace. Amazing library of ancient texts; Richard very jealous indeed of these bookshelves..ikea they are not! 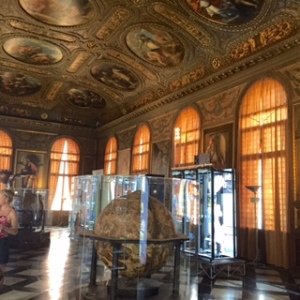 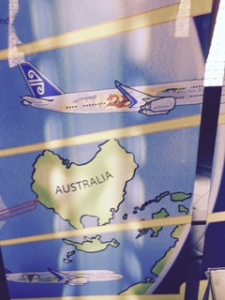 The guide books say three hours for the Doge’s little house; We were there for close to six and hardly touched the wonders of the two museums.  Venice, like Italy, like Europe, needs a lifetime of study to remind yourself, to misquote Eliot, seeing  that in our end is our beginning and we find ourselves back at the beginning seeing things for the first time and asking the same age old questions….

What started the ancients thinking about more than food, shelter and sex? what caused them to look out and up and to see gods in rivers, clouds, mountains, forests and seas? what mystery is there in the world’s languages, separated by geographical isolation and causing so much distrust and misunderstanding? why must humans seek to dominate, hurt and kill and destroy one another just for power and wealth; how can artists see the beauty in what they create without asking about the justice or lack of wisdom in the actions they depict? how could these Renaissance men and women discover so much in the new world, trade so cleverly with the old world,  find ways to examine by telescope and microscope the hidden world and the universe world  but not puzzle out how to simply love one another and care for one another?

How could Christian men and women read or hear God’s word in scripture and paint it in magnificent art and yet ignore its quite simple and basic teaching …a tree is known by its fruit, love one another, care for the poor and the stranger and the foreigner, my thoughts are higher than your thoughts says the Lord; if you seek me with all your heart you will find me…

Keats knew beauty was truth and truth beauty, Yeats knew the centre somehow could not hold,  Goethe knew that there is lust for power and knowledge greater than man that can destroy man, Shakespeare knew we walked on a stage before a particular audience..I feel the riddle of Venice that has encouraged many to write..but in the end there is,

as Lewis and MacDonald have written, a deeper magic and a deeper longing, a calling from a place we belong to and have not arrived at yet.

One problem with the Doge’s art and power is that most would admit that the art displays the power of Venice rather than the power and love of the Son of God so often depicted, and that maybe the seat of the human problem. But enough philosophy for now..knowledge puffs up says St Paul and I think he was right to challenge the Athenians about their unknown God. St Paul above all in Romans called for unity in the emerging church he was called to help found. We surely need to heed his call today and also his reminder in chapter 2 that you are without excuse Oh man who judges for the one who judges practises these things but what can be known about God is clear to all people.  Here ends today’s lesson according to Richard. 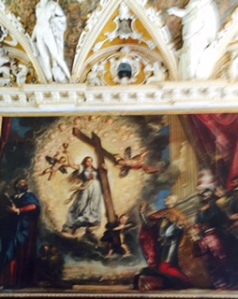