I had an inauspicious beginning to my day by scoring almost full 9.9 points for my reverse inward pike with double twist starting from a standing position in the bath while showering and somehow, very soapy, ending up with a large bang on my back on the bathroom floor!  I am still not sure how all this happened and even more uncertain how nothing was broken especially parts of me but I am very thankful that everything was ok! It could have been a very difficult end to a promising career as an Italian art tour guide that I have been working on lately.

Today we tackled the local railway system again with a journey to Vicenza, the closest large town west of Padua. The trick was that there were trains every five  minutes to Venice but nothing towards the West until 11.40am. We filled in the time by having a No 1 haircut for me in a local salon in which I was their first male customer!  Perhaps a new trend for Padua!  We then visited the local parish Catholic church which was built by the Jesuits in 1921, a red brick building almost Orthodox in initial appearance with a very simple attractive interior (definitely no Baroque!)

Exterior of Padua Jesuit church 1921. In appearance looks like an Orthodox Church 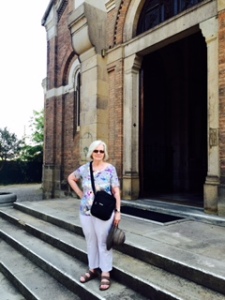 Ann hot already at 9.30am in the morning in Padua (actually Ann has always been hot!)

Vicenza seems to be a city “owned” and designed by the C16th architect Palladio. He designed over 20 major buildings in the city including a number of massive villas in the surrounding hills for wealthy families. If in our travels there is a line in consistent elegance for Italian cities for me it would run Bologna -> Padua -> Lucca -> Vicenza, although I am sure there are many other cities I have never seen that should be in this list including Ferrara. Palladio was totally committed to reintroducing classical style so they are in abundance in Vicenza, columns, ionic and corinthian capitals, triangular pediments, large rectangular piazzas, colonnades everywhere (covered verandahs) and massive high towers, loggias  and statues, statues, statues everywhere, all in white.

Ann in the shadow of Andrea Palladio, C16th architect of over 20 major buildings in Vicenza, and whose return to classical architecture had a huge influence on the rebuilding of London and throughout the British Commonwealth

Kenneth Clark comments in Civilisation  on the influence of Palladio on English architecture including the Bank of England building, St Paul’s Cathedral and many other major English structures built by Wren and others after the fire of London. It is not uncommon in Australian cities also. He also comments at length on Palladio’s last building the Teatro Olimpico ..a wonderful theatre with tromp l’ceil effects that are quite deceptive. Unfortunately for us we were in Vicenza on a Monday when pretty well everything in the city is closed but even from the outside the building is interesting and attractive.

We wandered the streets, once more in oppressive heat, in awe of the architectural proportion and beauty all around us.  The massive civic Palazzo Chiericati; the equally massive and domed Cathedrale di Piazza Duomo; the huge Basilica Palladiana which is actually not a church at all but the local meeting place for business and town government with offices over elegant shops in the loggia below; the extraordinary unusually red marbled Loggia del Capitaniato and church after church with elegant faces to the street too many to mention.

Basilica Palladio a building which was Palladio’s first work in Vicenza and is effectively the town hall office with elegant shops in the colonnade below. It has a gleaming green copper roof

Basilica of San Gaetano, one of many classical churches in Vincenza..columns and statues abounding

The Vicenza Duomo designed by Palladio along with others; destroyed by allied bombing in WW11 but now restored

A second view of the Duomo at Vicenza

We returned to the almost equally elegant Padua (although a city with much more of an “edge” and felt very privileged to experience human commitment to architectural excellence in so many different ways.