Saturday 18th July Our day began with a visit to the Scrovegni Chapel to see the Giotto frescoes in the Capella Chapel and the Civico Museum.  The history of Western Art seems to have begun with Giotto and I have long wanted to see this work although I note that Ruskin gives first place to the French craftsmen who created the tracery and patterns for the Gothic cathedrals culminating in Chartres and Amiens.  The Capella Chapel was larger than it looks in photographs and the frescoes are well preserved except in the old sanctuary.  They tell a very clear Biblical story with no additional legendary material and cover every inch of the walls and ceilings although the ceiling is a simple night sky. In addition Giotto has represented the major Christian virtues and vices as individual figures in large paintings on each side of the chapel beneath the Biblical frescoes.

No photography was permitted and we were only given 15 minutes in a group of 25 but it was a quiet and cool place and we had been well prepared by a 15 minute film with English subtitles.  They even accepted a seniors half price which was a first on our tour. The Museum is an excellent collection of ancient Egyptian, Roman and Greek monuments and jewellery and funerary caskets and an excellent art gallery with works by Bellini, Donatello and Mantegna.  Next door is the ancient church of the Eremites also with frescoes from Mantegna in the Ovetari chapel. This church and the frescoes were badly damaged by allied bombing in 1944 and the frescoes have been restored by following black and white photographs. It is interesting that “The martyrdom of St James” that so deeply impressed Proust on one of his few journeys outside France, can no longer be seen in the original although the reproductions are still very impressive, scattered as they are with “bits” of the  originals and two still complete originals. 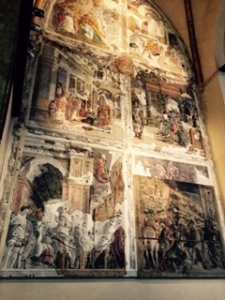 Restored frescoes by Mantegna in the Ovetari Chapel of the Church of the Eremitani next door to the Scrovegni chapel. The church was pretty well destroyed by allied bombing in 1944 including “the martyrdom of St James” but the restoration is impressive based on black and white photography. 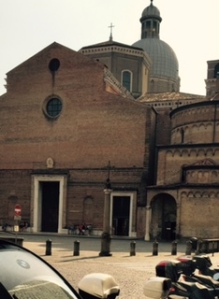 The Duomo at Padua; a curious mixture of styles added over time with the outside unfinished but spectacular and a working congregation inside with exctiting modern artistic features in the sanctuary

a typical busy piazza in Padua

After this visit we found a cool place for lunch then retreated from the intense 38 degree heat to the hotel and had a siesta. We emerged at 5.30pm and wandered through the stately and elegant streets of Padua old town where crowds were building but nothing like Rome.  We found the Duomo which was not finished on the outside and a curious mixture of stages and styles.  The inside however was lavishly decorated and  again clearly a worshipping congregation with clergy getting ready for a service and for the next day’s Sunday services.  In the main sanctuary modern very artistic fittings had replaced the traditional architecture and the difference was refreshing after so much Renaissance architecture.