Mooching around in Mantua

Rubens painting of a lapdog in the art gallery of the Ducal Palace of Mantua.  Dog is actually Dylan!

Sunday 19th July Today we decided to defeat the heat by travelling in (mostly) air-conditioned local trains to  the ancient city of Mantua, changing trains at Verona of Romeo and Juliet fame. Mantua is a world heritage site for its amazing palaces, old city centre, impressive churches (an early C4th mausoleum church,  a huge domed duomo (currently being restored), and early St Barbara’s, closely related to the Ducal Palace of the Gonzaga Family.

Our goal was to see both the Ducal Palace (which is now also a museum and art gallery) but also the “Camera degli Sposi” = “bridal chamber” which is located alongside the palace within the impressive Castle of St George and which contains some very well preserved paintings by Mantegna, a particular favourite of mine. Negotiating the local train system was no simple matter because once again English is very  scarce everywhere; having finally obtained our tickets we happily jumped on to our train to Verona only to find, after we changed trains at Verona that we should have validated our tickets before boarding. We were lucky to not be checked on the first half of our journey because we have met fellow travellers who were instantly fined on the spot by card payment of 80 Euro for not validating so we have learned that lesson.

Mantua is right away from the tourist trade so getting off the train after a four hour journey including waiting at stations was only half the battle. There were no taxis or buses and no signs to old town so we set off in hope and were assisted by English tourists with a map. Again the temperature was high 30s. The effort was worth it because the town centre deserves its world heritage status.  We first found the little circular mausoleum church which is perhaps one of the earliest Christian churches in Europe and secondly the Romanesque St Barbara’s Church closely associated with the Ducal Palace of the Gonzagas.

St Barbara’s Church in Mantua next door to the Ducal Palace. Again an early church evidence of many additions with classical front facing much higher than the rest of the building.

A tiny circular mausoleum church, the earliest in Mantua (C4th?). Alongside is the C15th Renaissance residence of one Giovannni Boniforte da Concorazzo, a wealthy merchant

The Camera degli Sposi (Bridal Chamber) is a small room in the middle of the Castle of St George adjacent to the Ducal Palace.  The room is surrounded by frescoes by Mantegna which involve various celebrations involving the Gonzaga family. Mantegna as ever paints with impressive realism for an early C15th painter and the character of the individuals in his paintings comes through with shining clarity. The ceiling of the small room is based on the Roman pantheon, “open to the sky” with an “oculus” which tries to give a tromp l’ceil impression of a hole in the roof. The Castle also contained an impressive collection of porcelain and bronzes donated by one Freddi, a wealthy collector. 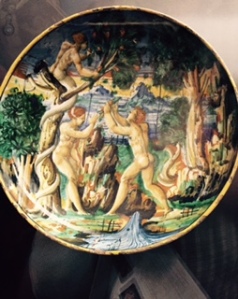 an early porcelain plate from the Fredi collection which shows an Eden scene with the serpent actually shaking the fruit free from the tree of the knowledge of good and evil!

Painting of the Gonzaga family by Mantegna, one of a major group of frescoes in the Camera degli Sposi or “bridal chamber”

The Ducal Palace itself is a massive structure with four storeys, huge halls and countless large apartments.  The palace is now filled with rich tapestries, paintings, and mediaeval artefacts from Mantua and all over Italy.  A key feature is the quality of the ceiling paintings which are all original to the palace.  We visited almost 40 rooms and were museumed out in the finish. A third component of the Ducal Palace is an exceptional collection of gardens (mostly large  trees and perennial shrubs).  A huge elm tree  garden sheltered many weary visitors in the heat and a “hanging garden” of manicured shrubs also drew applause as did  a secluded “four plane tree” garden.

One of the many extraordinary ceiling paintings in the 43 presentation rooms of the Mantua Ducal Palace.

We were glad to have made the effort and the palace was a cool place to be temperature wise as well.  We were not looking forward to the long walk back to the station and hired what we thought was a taxi driving through the square of the palace and asked to be driven to the station. The driver seemed taken aback but agreed to take us and only as we approached the station did it dawn on me that it was not a taxi at all but just a very obliging older Mantuan man who was probably coming home from mass. We were very embarrassed and he was very polite and helpful and thought it was very funny being hijacked by two sweaty Australian tourists.  As it happens his help enabled us to gain an earlier return train and an equally helpful conductor ignored our non validated ticket and told us how to get on to an express back to Padua. All in all we got back in record time feeling that God had really been looking out for us.

1 Response to Mooching around in Mantua